Finally I’m getting around to my work from last year (second year of my course)!

Our first semester was based on magazine publications and developing concepts and photo shoots forspecifically products such as beauty products, accessories and clothing pieces. The aim was to come up with three shoots based on a colour palette/theme that we drew out of a hat – mine was ‘Recycled’: a mix of black, sherbet yellow, cherry red and two tones of grey. Also given was a season trend: ‘Hactivate’ – a sport inspired fashion trend for the season which combined bold eclectic colours with geometric and futuristic shaped clothing that stylises luxury sportswear. Hactivate would become the core theme of the shot. In relation to this we then had to relate the theme/concept of the shoot to an olympic sport – I chose Motorcross (I don’t think its actually considered an Olympic sport but it got approved by my teacher so whatevs haha). We also had to pick a magazine from a selected list; I decided that Spook was probably the best fit, as it is quite edgy, urban and a bit dark. This publication was more about the editorials than the advertising so I had to be careful with how I set up my shots. Above is my concept board or ‘mood board’ to express my ideas and themes.

The three shoots differed: one was a flat lay – where products are photographed individually from birds eye view and all edited on computed to be on the same page, the second and third we’re depth of field shots which is basically taking the photo dead on (one had to be from a slightly different angle and shot solo). 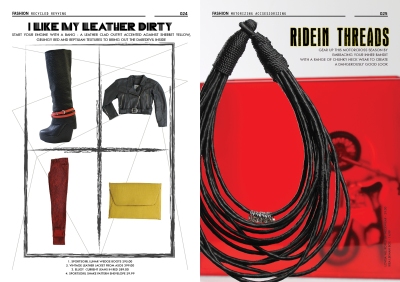 The two spread I’m showing here include the flat lay and the accessory depth of field – the beauty one didn’t turn out so great. The flat lay is basically some motorcross inspired items including a leather jacket, leather boots (with a red belt wrapped around it), a pair of snake skin print pants and a yellow snake print clutch to bring in that last colour of the assigned colour palette. After I took a photo of each item individually, I used photoshop to cut them all out (I forgot the proper term already haha) and placed them into an InDesign document where I added the extra graphics and text.

The right most photo is the accessory shot, I used a statement necklace from Lovisa and added some sliver rings with bolts hanging off them to add to the motorbike feel of the whole concept. I also shot with a red background which was actually just a plastic storage box from Ikea as well as putting in a toy motorcross bike to add to the effect.

This assignment was pretty fun, I enjoyed mocking up a spread for Spook and I learn’t heaps more about photoshop and InDesign that I hadn’t before so I really did gain a few new skills. I reakon my only let down was the beauty depth of field – the photo just wasn’t great quality as it was my solo shoot (no teachers to help or guide me) but it was a fun assignment.

All by Aimee Meade is licensed under a Creative Commons Attribution-NonCommercial-NoDerivs 3.0 Unported License.
Based on a work at aimeemeade.wordpress.com.